Look at me, I’m dancing!

The observation hive of Vita’s Blogger wants to release a swarm but the weather is inclement. A dancing bee (she has pollen in the baskets on her legs) can’t get any attention in the brood chamber, where the bees are focused on swarming, so she moves to the less swarm-obsessed super where they pay more attention. 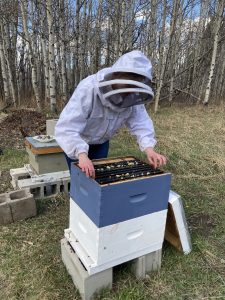 Veterinary students at the University of Calgary in Canada have caught the bee bug and, through their own initiative, set up a Honeybee Health Club to learn more about an animal for which they have new responsibilities. As students they are short of cash and so are seeking modest funds to help equip a teaching apiary on campus.

Vita Bee Health is already helping and any funds the students can gather are being matched by a generous anonymous donor. The club’s GoFundMe page has so far raised Can$1,660 and they are keen to boost this quickly so that the teaching apiary can open this season.

END_OF_DOCUMENT_TOKEN_TO_BE_REPLACED

Vita Bee Health is a sponsor of three free webinars coming up at 8pm (BST) on three Thursdays in May:

20 May The genetics of the Irish honey bee Jack Hassett

Full details and how to register (free and essential) for these webinars orgamnised by the British Bee Veterinary Association (BBVA) here: full details and free registration details

A tale of two colonies – spot the difference

Two colonies, four metres apart at 2.30pm on 30 March 2021 in Hampshire UK. Can you deduce what is happening inside? Answer below.


The first colony is queenright. It has ten sides of brood and is progressing well gathering lots of pollen — vital for the young larvae within.

The second colony is queenless. It has no brood, is gathering hardly any pollen and even has a drone — possibly left over from last year. It is doomed and may well know it.

Changing of the guard

Graphs representing the changing population size of honey bee colonies often indicate a low point about now for bees living in these latitudes of Britain. The graphs are invariably very smooth — but is that really the case? Is the population change really so gradual?

The colony that has overwintered in the observation hive numbered about 2,500-3,000 bees until recently. The death rate, as indicated by the work of the undertaker bees, seemed very low. Very few dead bees were to be seen at the foot of the frame awaiting their exit.

Last week the weather was so cold that no bees could venture out but yesterday temperatures reached 10C. Flying time!

Lots took advantage of the better weather but this morning the population is noticeably smaller.  Many — perhaps a few hundred — must have died on the wing. The left and right sides of the brood frame, which were quite well covered yesterday, are rather more sparse this morning.

Low and right of centre, the much tighter cluster (that has been there since the beginning of the month) shows where the queen began her season’s laying. She had been off-lay since last autumn but is now preparing her colony for the season ahead.