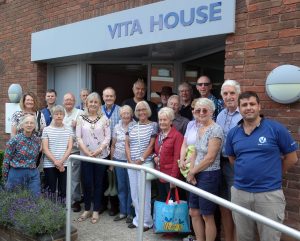 On 13 July 2019, 18 members of the Blandford & Sturminster BKA (part of Dorset BKA) enjoyed a rare public visit to Vita Bee Health’s apiary in Basingstoke, UK. They were honoured to be joined by the Mayor of Basingstoke Councillor Diane Taylor, and her consort.  An additional special guest was a local boy with learning difficulties who is fascinated by bees.

In groups, visitors were shown the Vita apiary at a town allotment by Paulo Mielgo and learned about how two Basingstoke Beekeepers run it, the Vita trials there, and tips about the application of Vita’s products.  There was also an introduction to Vita’s local and international R&D activities followed by a stimulating Q&A session in Vita’s office.

Basingstoke’s mayor was very impressed by Vita’s activities and proud that such important pollinator work is taking place in her town. Finding a queen in Basingstoke, on her very first visit to an apiary, was a particular thrill!

Clearly Blandford & Sturminster BKA enjoyed their visit: “Very many thanks for a wonderful day. Everyone who came found it instructive, interesting and were most impressed with the very smooth organisation.” A visit such as this “makes me review what I do”. 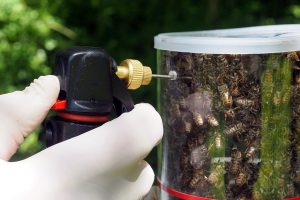 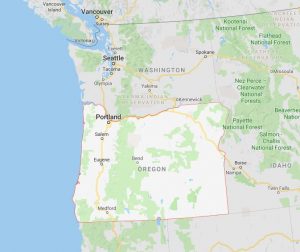 5.40 How Jerry moved into beekeeping and a new career

11.40 The arrival of Africanized bees in the USA. Why they have been less fiercesome in the USA than expected

21.00 Honey bees as livestock.  Do we keep bees alive or do bees use us to keep alive?

44.00 Why is the public so concerned with honey bees? And how can them help them?

51.00 The amazing characteristics of honey bees

1:06:00 The challenges of working for an agribusiness

1:22:00 Vance Crowe and Jerry reflect further on working for an agribusiness

1:25:40 Being disciplined and good habits at work 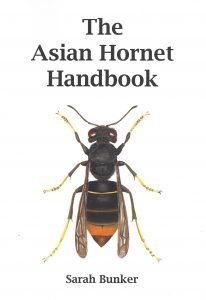