You may have temporary difficulties in finding supplies of Vita Bee Health AFB and EFB diagnostic kits. These two types of kit have a lateral-flow component that works like a pregnancy test kit to indicate if sampled larvae have American foulbrood or European foulbrood.

Unfortunately, an essential component of the lateral flow device has been in short supply and we have therefore had a delay in the manufacture of the kits.

The kits are sophisticated devices and their composition is very specific. Although alternative components were tested, Vita was not prepared to release the resulting product because the sensitivity of the kits was not up to standard. This has been very costly for Vita and we realise there is a shortage in the market. However, we prefer users to be able to rely on the accuracy and robustness of our products — customer satisfaction is very important to us.

We have recently managed to source a limited supply of the key component. Quality control testing looks good and manufacture will be resuming shortly.

Further development of the kits is also underway.

Banská Bystrica in Slovakia is getting ready for an invasion of young beekeepers at the beginning of July. Vita Bee Health is proud to be a sponsor the tenth annual International Meeting of Young Beekeepers (IMYB).

From 3-7 July, about 100 teenagers, aged 12-17, will come from all over Europe and beyond to form multi-national teams to tackle practical and written beekeeping tasks — everything from inspecting for brood diseases to extracting honey and from honey tasting to pollen identification.

As IMYB founder, Jiri Piza says, even if these youngsters don’t keep bees all their lives, beekeeping will have given them a perspective which will almost certainly influence their life choices and decisions in their careers.

Varroa does have a heart

The heart of Varroa destructor has been discovered by Alexandros Papachristoforou and Evgenia Koutouvela in a project part-funded by Vita Bee Health.

Surprisingly, until now there has been no mention in the literature as to whether varroa had a heart or not! Because of its size, physiological study of varroa has been difficult. (Ticks, which are slightly bigger, are easier to study.)

The heart was eventually found quite near to the brain and is quite like that of ticks. But unlike other mites, varroa has two ventricula (chambers) and six rather than four ostia (openings).

The discovery of the heart is expected to help in developing a new bioassay to measure the effect of varroa control treatments.

The bees in observation hive have survived the winter and are now frantically building up their reserves. This is the queue at the protruding plastic tube leading through the wall to their hive. They are loaded up with bright yellow pollen.

The first batch of young bees has emerged and a lot more are on the way. Soon, I suspect they will have to be moved to a nucleus before graduating to a full size hive. 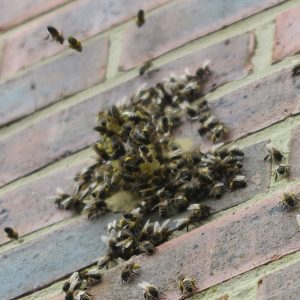 As a follow-up to last week’s post by Bee Gym inventor Stuart Roweth on Using and trialing the Bee Gym, here are Stuart’s suggestions for cleaning and repositioning the Bee Gym.