ApiProtect is easy to install and use. Late in the season when an Asian hornet attack is under way, the board is unfolded to reveal a highly sticky surface and is then baited with either ApiArmour (coming soon from Vita Bee Health) or with a single Asian hornet (the hornet can be caught by using the board like a sports racquet to swipe and stick a flying hornet). 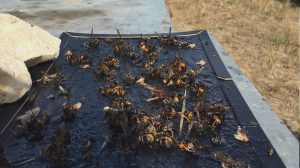 The sticky board is then placed carefully in the apiary in an elevated position, away from flying colonies and preferably under a raised cover that protects from the rain and keeps inquisitive birds away. A stone or other weight on top of the board prevents the trap from being blown away.

The ApiProtect trap should be inspected regularly and discarded and if necessary replaced when fully loaded with Asian hornets.

The ApiProtect glue is non-toxic and odourless. The application of a suitable bait (such as an Asian hornet) will reduce the chances of by-catch.

Since its first sighting near Bordeaux in in France in 2004, the Asian hornet has spread into every department of France and into surrounding countries causing great damage by predating on honey bees and other native pollinators. ApiProtect is suited to those areas that are under heavy predation pressure, currently much of France, northern Spain and coastal Portugal.

Full details on ApiProtect and how to use it.