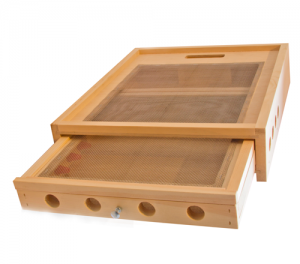 ApiShield is a patented trap to protect your bees from the Asian hornet which is invading many European countries.

How to use the ApiShield Hornet Trap

The ApiShield trap completely replaces the traditional solid hive floor. When first installed under a hive, the side entrances should be blocked for at least 3 days with the supplied bars. This teaches the colony’s bees to enter only through the hive entrance, which they can protect. Although the floor can be in place all season, we strongly recommend that the side doors are not opened until towards the end of the season, when it will trap the pests of honey bees.

After three days bees from the colony have learned that their entrance is at the front only. When the bars are removed, the bees will not use the side entrances but predators will enter through these unprotected openings, attracted by the natural scent and sound of the colony. No bait is required. Cone entrances prevent the invaders from leaving the ApiShield trap and they will die from dehydration.

The ApiShield drawer can be checked during regular colony inspections and trapped predators safely disposed of.

ApiShield has been developed by Vita, based on the ApiBurg® trapping system by renowned bee scientist Professor Ifantidis working in conjunction with scientists and bee research organisations around the world. Manufactured in hard-wearing pine wood (a polystyrene version will be available soon), ApiShield is currently available in the following sizes: Dadant (43 x 50 cm), Langstroth (43 x 51 cm) and British National (46.5 x 46.5 cm).

During the most dangerous phase (late in the season), hornets are significantly more attracted to ApiShield than to bait traps. Next year’s hornet queens are also most likely to be trapped, offering pre-emptive protection for the following season.

Unlike bait traps, ApiShield does not trap non-target pollinators such as flies, beetles and butterflies. Colonies protected by the ApiShield trap show significantly higher survival rates than unprotected colonies.

Any suspected sightings of the Asian hornet in Britain should be communicated immediately (with photograph/s) to:  or via the Non-Native Species Directorate.
Although the Asian hornet has spread through much of western Europe, it appears not to have established itself in Britain and, to date, the sea is providing something of a barrier. There have been sightings but so far all nests appear to have been destroyed.