University researchers have clearly demonstrated the success of Vita’s swarm lures and revealed a fascinating new aspect of honeybee biology.

Introduced in 2011, Vita’s Honeybee Swarm Attractant Wipes are a simple and low cost way of attracting of honeybee swarms to specific locations. They help beekeepers manage their bees, increase the prospects of bigger honey harvests and can help prevent swarms occupying inconvenient locations. The lures resemble cleansing wipes in sachets and are impregnated with natural oils. 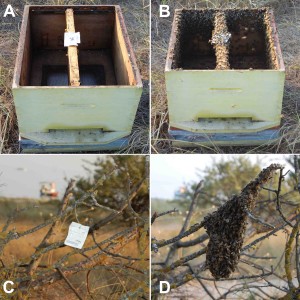 The researchers showed that the Vita swarm lures are highly effective and succeeded in attracting between 60% and 90% of swarms in a test apiary of 40 healthy colonies. The lures were effective when placed just a few metres from the original colonies.

The researchers also discovered a fascinating difference in the behaviour of primary swarms (headed by an old queen) and secondary swarms (headed by one or more virgin queens). Secondary swarms were attracted to empty hives containing the lure and immediately started setting up a permanent nest. In contrast, the primary swarms were attracted to the lures pinned to the branches of trees and only then would they start looking for a permanent nest site.

Dr Max Watkins, Technical Director of Vita, said: “We are of course delighted that this rigorous scientific research has confirmed and even exceeded our initial evaluation of the effectiveness of Vita swarm wipes. The very easy-to-use lures give beekeepers a management tool that has many positive features and can ultimately lead to larger honey harvests because the workforce of bees is not lost through swarming at the critical time of year. The fact that the lures can contain swarms within the apiary is a huge bonus for beekeepers.”

Watkins continued: “The difference in swarming behaviour of primary and secondary swarms is fascinating and has never before been recorded in the scientific literature. The fact that primary swarms tend initially to hang up in trees before seeking a permanent home whilst secondary swarms are prepared to set up home immediately in hives is bound to lead to more research and will be a very useful piece of information for beekeepers in managing their colonies.”

Full details on the Vita swarm lure and its use can be found here.

The paper Attraction and direct establishment of primary and secondary honey bee swarms using swarm-tissue sachets by Dr Alexandros Papachristoforou and Konstantinos Ilanidis has been published in the latest issue of IBRA’s Journal of Apicultural Research and is available online.

Vita (Europe) Limited is a mite control and honeybee health specialist. It is the world’s largest dedicated supplier of honeybee health products to the honey and pollination industries.

With headquarters in the UK, offices in Italy, France and Russia, and partners across the globe, Vita researches, develops, and manufactures a range of honeybee health products. These products are marketed internationally through a network of 60 distributors in 50 countries.