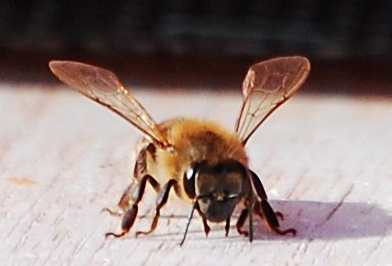 The surprise findings discovered by a team of researchers from Greek and French organisations in collaboration with Vita (Europe) Ltd, the UK-based honeybee health specialist, will cause a complete re-thinking of honeybee defence mechanisms and could lead to the production of a natural, low toxicity local anaesthetic for humans and animals.

The natural anaesthetic that has been discovered in the bite of the honeybee and measured at the University of Athens is 2-heptanone (2-H), a natural compound found in many foods and also secreted by certain insects, but never before understood to have anaesthetic properties. Independent tests have verified Vita’s findings and the potential of 2-heptanone as a local anaesthetic.

As a naturally-occurring substance with a lower toxicity than conventional anaesthetics, 2-heptanone shows great potential. Vita has already patented the use of the compound as a local anaesthetic and is seeking pharmaceutical partners to develop it further.

Until recently, research seemed to indicate that 2-heptanone was either a honeybee alarm pheromone that triggers defensive responses, or a chemical marker signalling to other foraging bees that a flower had already been visited. Vita’s results contradicted these notions.

The new research clearly shows that 2-heptanone paralyses small insects and mites bitten by bees for up to nine minutes. Somewhat like a snake, the honeybee uses its mandibles to bite its enemy and then secretes 2-heptanone into the wound to anaesthetise it. This enables the honeybee to eject the enemy from the hive and is a particularly effective defence against pests, such as wax moth larvae and varroa mites, which are too small to sting.

Dr Max Watkins, Technical Director of Vita (Europe) Ltd, said “We are very excited about our findings on at least two levels. Firstly, the revelation that honeybees can bite enemies that they cannot sting confounds some existing ideas and adds significantly to our biological knowledge. Secondly, the discovery of a highly effective natural anaesthetic with huge potential will be of great interest to the pharmaceutical industry eager to develop better local anaesthetics.”

In laboratory neurophysiological trials in the School of Biology of Aristotle University of Thessaloniki (Greece), 2-heptanone was found to have a similar mode of action to Lidocaine, the dominant local anaesthetic used in humans and other mammals. 2-heptanone is found naturally in many foods such as beer and white bread and is so safe that it is permitted as a food additive by USA regulatory authorities. 2-heptanone therefore offers considerable potential as an alternative to Lidocaine. Very recent laboratory research using mammalian cells in the USA, has confirmed Vita’s expectations that the anaesthetic could be as effective on humans and mammals as it is on insects and mites.

In considering the biological impacts of the findings, Dr Alexandros Papachristoforou, a Vita researcher working under the supervision of Professor G Theophilidis in the Aristotle University of Thessaloniki in Greece, said: “It is amazing that this second line of honeybee defence has gone undetected for so long. Beekeepers will be very surprised by our discovery and it is likely to cause a radical rethink of some long-held beliefs. It will probably stimulate honeybee research in many new directions. For instance, many beekeepers have spoken of the ‘grooming’ behaviour of honeybees in helping to control varroa populations. This grooming behaviour can now be interpreted as biting behaviour.”

Dr Papachristoforou described how the unexpected properties of 2-heptanone were discovered: “We were investigating wax moth control. Wax moths are a serious honeybee pest whose larvae consume wax and pollen, often completely destroying honeycomb. When exposed to 2-heptanone, which is produced naturally by honeybees, the wax moths appeared to die. However, on closer inspection, we realised that the wax moths were merely anaesthetised for a period of one to nine minutes. This was quite unexpected, so our scientific team set up a series of rigorous experiments to find out what was really happening and came up with our remarkable discovery.”

Several organisations contributed to the research in collaboration with Vita (Europe) Ltd: the Aristotle University of Thessaloniki in Greece, the French Centre National de la Recherche Scientifique (CNRS), Université Paris-Sud, Cyprus University of Technology, and the University of Athens.

PLOS ONE publishes primary research from all areas of science and employs a combination of peer review and post-publication rating and commenting, to maximize the impact of every report it publishes. We are published by the Public Library of Science (PLOS), the open-access publisher whose goal is to make the world’s scientific and medical literature a public resource. All works published in PLOS ONE are Open Access.