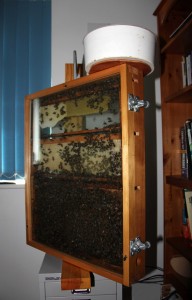 The feeder in place. Empty again but there are still bees investigating it.

I’ve often heard it said by experienced beekeepers that feeding bees sugar involves a lot of waste because the bees get so excited they consume lots jut by being excited.

And now I have seen evidence of that in the observation hive.

I had to replace the original super frames because they were becoming so full. As soon as the flow ended the bees rapidly consumed the little that was stored in the replacement frames. It happened with frightening speed and I think I just started feeding in time.

They quickly consumed the first kilo of sugar syrup — but there isn’t much to show for it in the way of stores in the comb. In fact I can’t really see any! But oh did they get excited! I think it all vanished in their sugar rush.

It just goes to show how closely an inevitably undersized colony in an observation hive needs to be monitored.

I’m lucky enough not to have to feed my apiary bees in the autumn. I used to feed them, but never enjoyed the messy process. So now I make sure — one way or another — that they have plenty of honey stores to take them through winter and watch closely to make sure they have enough in the dangerous months of March and April when lots of stores are needed to feed the developing larvae.