The slide that caused a gasp 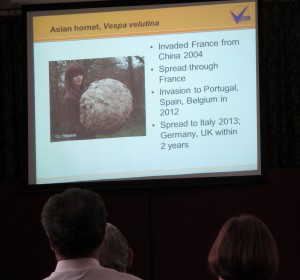 The slide that caused a sharp intake of breath

Here’s the slide that caused a sharp intake of breath and some reflex questions during Dr Max Watkins’ talk at  the National Honey Show in Weybridge, Surrey, England last Friday.

It shows a very trusting young woman holding a beach-ball sized nest of the Asian hornet in France. Fortunately, the nest was empty, but most people posing for such a photograph would rightly have demanded very convincing evidence of that!

Believe it or not, these nests can be quite difficult to spot. They tend to be in the upper branches of trees and not very visible until the leaves fall — by which time they will have had time to wreak havoc with honeybee colonies.

Vita expects to have news of a hornet trap in the next few weeks.