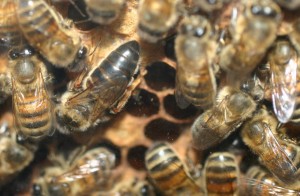 At last! It’s been a full week since the queen in the observation hive emerged from her cell. Because I couldn’t find her I had begun to think that the cell had been torn down and that they were working on some other queen cell that I couldn’t see.

Over the past week, I have looked and looked for her with no success. Then this morning  I heard her piping, then cawing a bit like a seagull, but a few octaves lower. Recognising the sound, I immediately stopped work and with one glance at the hive spied her immediately.

But it was quite some time before I was able to photograph her. She is very elusive, very dark and often has her bottom in a cell.

She has started to lay and I think today is her first day of egg production. I’m not quite sure what all the piping has been about. Maybe it was some sort of celebration. It’s been going on and off all day! It could even be from another queen still in a cell that isn’t obvious!