A mitey shock! Updated 4 weeks on. 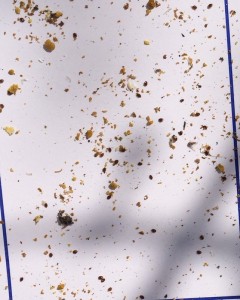 Too many varroa too early in the season!

I had an unwelcome shock opening a hive this month to find that there were one or two bees on each frame with symptoms resembling DWV (Deformed Wing Virus). DMV often indicates a varroa infestation. I’ve only ever seen bees with its symptoms on the occasional bee in a hive — and never so early in the season.

So, suspecting varroa even though the colony had been treated the previous autumn, I did a a 24-hour test with Apistan (by inserting two strips for 24 hours and counting the mite fall — Apistan acts very quickly on the varroa not under cappings — which drop later in the treatment).

By the next day, about 200-300 had appeared on the varroa screens, so immediate action was necessary!

Conditions were good, so radical action was feasible. The colony was quite strong, the oil seed rape was beginning to flower and provide pollen and nectar, and the weather forecast was good.  I removed ALL four of the frames with sealed brood (which would contain a lot of varroa) and let the colony start again on foundation and some clean comb with a few stores. The Apistan will be left in until the colony needs supering.

With luck, the DMV symptoms will disappear along with the varroa and who knows I might have a very healthy invigorated colony quite soon. We’ll see! 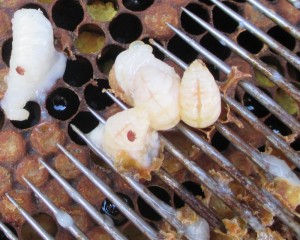 Meantime I have inspected the other colony in the apiary and colonies in my other apiary. Fortunately they all seem fairly clean of varroa — in fact sampled colonies show only a mite drop of one or two after the Apistan 24 hour test.

Why this single colony was so badly infested is a mystery. Perhaps for some reason the treatment was misapplied or perhaps the colony was invaded by another varroa-infested colony after the treatment. In any event the mild winter has probably helped the varroa to breed.

Four weeks on, the once varroa-ridden colony is thriving and even outpacing an adjacent hive despite having to start brood-rearing from scratch.

After the removal of the sealed brood and the first 24 hours of the Apistan treatment there has hardly been any further drop of varroa mites. The first of the new generation of honeybees are now emerging and all signs of bees with Deformed Wing Virus seem to have disappeared. The colony looks healthy.

I have now removed the Apistan strips (which didn’t have to remain the usual six weeks because the sealed brood had been removed) and put on the first super.