In search of a mate – Drone Congregation Areas – Part 1 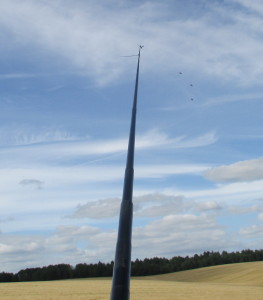 Gone fishing in a Drone Congregation Area. (The black dots are drones!)

I’ve always been fascinated by the existence of Drone Congregation Areas (DCA) — those special zones where honeybee Queens go to mate.

Humans have bars, clubs, churches and all sorts of venues. Honeybees have Drone Congregation Areas – somewhat mysterious locations in the landscape that are hard to define.

A Queen leaves the hive only a very few times in her life, so how does she know where to go to meet up with drones?

The drones leave daily in good summer weather, but how do they know where to gather? Their previous season’s brothers are long since deceased, so there is no family folklore to follow.

The research on Drone Congregation Areas (DCAs) is still in its relatively early stages, but a new book Mating Biology of Honey Bees provides fascinating insights. It helped in my search.

Here was my experience last Saturday in Hampshire, in southern England:

I acquired some queen pheromone, an extra-long fishing rod and on a warm sunny afternoon set off from one of my apiaries (like a demented soul) with a fishing rod and lure pointing skyward. (But not so demented as to be careless around power lines.)

Half an hour of walking produced no reaction from anything. So I returned to the apiary and put the lure at the entrance of one hive. Still there was no reaction whatsoever! I was beginning to doubt the lure.

I set off along a path in the opposite direction heading for what I interpreted from the literature might be a potential zone, in a dip in the horizon.

As I walked down a slope towards the dip, I started to hear buzzing. I walked further down and it disappeared. So I returned up the slope and so did the buzzing. Then the drones started to be attracted to the lure. Success!

I was amazed to be so lucky on my first outing. The DCA seemed quite clearly defined occupying an approximate circle of about 75 metres diameter. There were quite clear boundaries where the drones seemed to disappear — at the top of the slope, where it levelled off and bordered a small woodland, and as the slope approached the bottom, again lined by trees. Across the slope there appeared to be quite clear limits too.