Swarm in search of company, but not a home 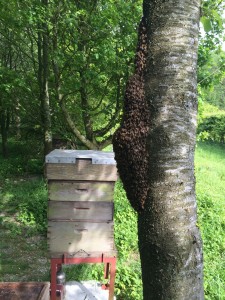 Swarm prefers leeward side of an apiary tree to a cosy brood box.

As I approached a newish apiary last weekend, I wondered where any swarms might choose to hang up. I had never seen a swarm leave that apiary before.  I was busy working on the final hive and happened to glance up …

The swarm wasn’t even from my apiary and it had chosen to settle on a tree rather than in a brood box right by it! It must have been there for quite a while as it had left quite a bit of wax on the tree trunk — and the wax traces also showed how the swarm was gradually moving up the trunk.

It was safely hived and is drawing comb to try to quarantine any disease it might be carrying in its honey. That comb will be melted down and the bees can start afresh in a new hive.

I have no idea of the origin of the swarm , but clearly it wanted company by settling in my apiary.

UPDATE 9 June 2015 The swarm was homed by a new beekeeper and is apparently doing well with the queen laying already. A further inspection of my own hives showed conclusively that it wasn’t from my apiary.