The size of Drone Congregation Areas 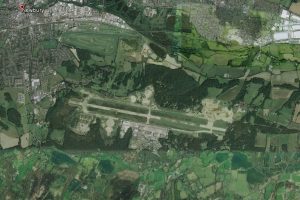 This season the weather has been cool and wet in southern England, offering few opportunities to investigate Drone Congregation Areas (DCA), those special areas of the landscape where honeybee drones gather in the hope of mating with a queen. But yesterday produced something rather special and an insight into how big a DCA can be.

First stop was the village recreation ground to see if drones were flying. It was 20C with sunny intervals – towards the lower temperature range for a DCA to form around here. From last year, I knew the recreation ground was a DCA and it didn’t disappoint. A field based on a slight rise, I was able to map the extent of the DCA: it is about 100 metres square (it may be wider, but field boundaries and private land mean that the width could not be fully explored).

The centre of the DCA was on the hilltop ridge, but walking down the slope, the drones soon stopped following the lure. They couldn’t be attracted again until near the top of the ridge. But they were on the ridge in abundance– between 50 and 100 following the lure.

I then moved on to Greenham Common, a military airport from 1942-93, famous in the 1980s for protests against nuclear weapons and made public parkland in 1997. Standing about 120 metres above sea level and to the south-west of Newbury (where there are lots of beekeepers), it’s a 3.5 by 0.5 km very flat plateau with few trees and stands about 50 metres above the town and surrounding areas.

I suspected there would be a DCA somewhere on the plateau slopes. I was wrong. I think the whole of Greenham Common plateau may be a DCA! I started at the east end of the Common and after a few minutes was about to give up in that location when a drone appeared and very soon a large number appeared. The appearance of the first drone took longer than usual, quite probably because the drones had a very large area to patrol. I kept walking around and the drones came and went a little, but were always present.

Wondering if the DCA could extend the full length of the plateau I went to the west end and experienced precisely the same thing.

I suspect that the DCA stretches the full length of the plateau and have plans to return to explore the middle areas.

So, six kilometres apart there seems to be one DCA covering one hectare and another covering perhaps more than 150 hectares. Weather permitting, I will report back soon.