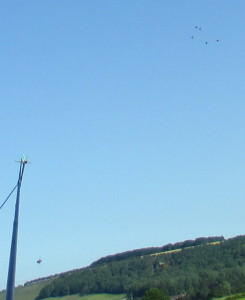 A group of drones (top right) – probably pursuing a Queen.

After the success of finding my first  honeybee Drone Congregation Area (DCA), I thought I’d try my luck again, but where to look?

The first DCA only partly fitted the rather vague research picture of where a DCA might be. By itself, the first DCA offered clues to possible locations, but not a definite picture.

After confirming the first DCA, we went off in search of another and after two very speculative and unsuccessful tests, I had a hunch about a place near my village. I didn’t  have a clearly defined site in mind, just a notion that a general area might produce a result.

It was getting late — after 5pm — so I wasn’t too hopeful The underlying geology was significantly different (no longer on the chalk downs) and the location was about five kilometres from the first DCA.

I walked along a track and the first sign was the buzzing of drones — then I saw them again! This time the site was a south-facing slope (the first was NE-facing), but again it was on a slight slope with a significant breeze which might have helped flight.

Again, the drones were flying at a height of about three to four metres, not the much higher altitude reported in the literature. 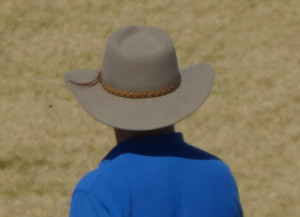 The hat lure with a drone just visible mid-left..

Curiously my hat seemed almost as much an object of interest as the queen lure!

So can I find a third DCA? I’m really not sure! But I’ll be trying.

The bees’ algorithm for finding DCAs is still a mystery to me. There is something in the “declination in the horizon” (where the brightest point on the horizon starts to appear less bright) description, but in my experience it’s not that clear. Then again I’m not flying at drone height!

The  first recorded DCA is said to have been by eighteenth century naturalist Gilbert White in Selborne, just 25 kilometres from Vita’s Basingstoke HQ.

On 1 July 1792, White reported hearing “loud audible humming of bees in the air, tho’ not one insect is to be seen”.

It’s said that almost 225 years later, the Selborne DCA still exists, so I’ll be of there soon fishing rod in hand. I wonder if these ares were even more spectacular pre-Varroa when there were more feral colonies.

Update: see a video of a third Drone Congregation area.