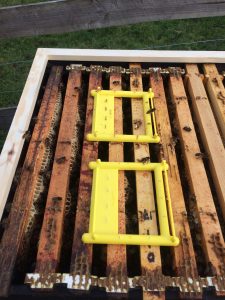 Trials have shown that adding a Bee Gym increases varroa mite-drop in the hive. The Bee Gym is a patented device to assist and improve grooming behaviour in honeybees to help them to control varroa mite populations.

The challenge for me as the inventor and developer has been to develop the Bee Gym methodology through experimentation and to increase its effect.

Where is the best location for Bee Gym?

As the bees groom themselves and dislodge a varroa mite, it seems to make sense to place the frame as near to the mesh floor as possible, so that the mite falls out of the hive.

However, a counter-argument is that since the bees spend so much more of their time on the brood frames, especially in winter, why not place the Bee Gym on top of the brood frames where it’s warmer and more likely to be visited? Unfortunately, this means that mites knocked off one bee are free to jump onto another.

In March 2018, I inserted a Bee Gym on top of the brood frames in an untreated double nucleus hive (Hive PB1). Nothing much happened initially, but I noticed that after three months the mite fall was down to 0 or 1 per day.  That in itself is not that remarkable as the colony might not be representative.

Closer inspection showed there was plenty of brood and eight months later this colony showed no significant varroa build-up, even though mites have been present throughout the season at low levels.

This was exciting because they are the kind of results I’ve been looking for during the six years of the Bee Gym project. On a personal level, it’s fantastic to see such healthy bees that seem to be sorting out their own parasites. They are the first to fly on mild days and always in greater numbers than the other hives.

I started looking at the condition of the Varroa mites that had come through onto the sticky board in Hive PB1. More than 50% had been damaged. Using a low-power microscope, you can see the damage: the mites have missing or severed limbs, damage which is known to be inflicted by bees. Observations like these might help answer the question of what happens once the mites are groomed off.

Which parts of the Bee Gym frame are most frequently visited?

Key to the Bee Gym design are the shaped pieces (flippers) attached to the plastic frame and the ways bees interact with them. Therefore, my next experiments tried to ascertain which of the flipper designs was the most effective.

Although Hive PB1 was a 12-frame colony, it was arranged as six frames on top of six in a polystyrene nucleus.  I started thinking that its success might be due to the tall thin shape of the hive. One Bee Gym is just enough to cover the area on top of six brood frames.

I have given many talks on the Bee Gym and a question that often comes up is:  why not use more than one Bee Gym?

My thinking had been that there seems to be a voluntary element to the bees using the Bee Gym, so why would you need more than one if the bees are going to make their own way to the Gym?

I experimented with various configurations of Bee Gyms over the next few months. The results led me to try placing two or more Bee Gyms into a shallow eke (shallow upward hive extension) on top of the brood frames in the four strongest hives in the apiary. This has produced some very interesting results. (Since the Bee Gyms need a gap of only 16 mm, an alternative to an eke is to place the Bee Gyms on top of a framed queen excluder [bottom space hive] or under a framed queen excluder [top space hive]).

Although there were plenty of varroa mites around, none of these hives had the kind of build-up in mite-drop levels I’m used to seeing in untreated hives throughout previous autumn periods.

The hives are doing well and the coming spring will confirm whether or not these bees are controlling their own mite levels and whether low levels can be sustained during the 2019 season.

Aims and purpose of the Bee Gym Project