Dr Max Watkins of Vita Bee Health explains: “Honey bees fiercely try to defend the front entrance of their hives, but the decoy side entrances appear to honeybee predators, such as the Asian hornet, as an easy unprotected way of raiding and decimating the colony. But they become trapped beneath a wire mesh floor and eventually die of dehydration. The colony’s bees don’t use these decoy side entrances because they have become habituated to use the front entrances where they are welcomed by their sisters.” 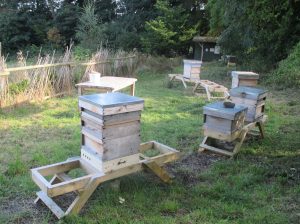 Although designed specifically to trap the Asian hornet, field trials have proved it to be very effective in catching other honeybee pests and predators including wasps, wax moth, and even robber bees that look for easy ways to raid a hive.

ApiShields replace existing floors in the autumn and can be easily installed in a very few minutes.

Vita encourages beekeepers, in North Devon especially, to install ApiShields to discover the extent of the current invasion. One ApiShield on one of the less strong colonies in an apiary will act as a good early warning sentinel. ApiShield should be treated with a suitable bee-friendly timber preservative before use.

Last year, an invasion appears to have been stopped by the destruction of an Asian hornet nest near Tetbury, Gloucestershire. Vita donated some ApiShield traps to local beekeepers and as yet there have been no further sightings.