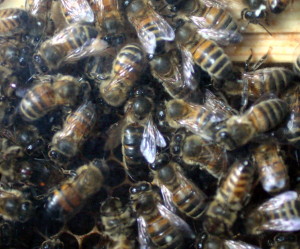 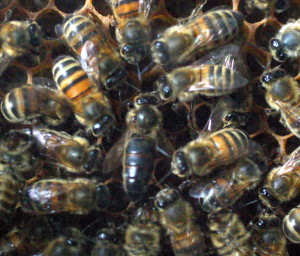 The observation hive has been in action for a few weeks now — and is as mysterious as ever.

There’s a queen, a retinue, but no brood or eggs yet …

On 17 May, I believe the virgin queen emerged from her cell. She has been tricky to see because she is so dark, but I’ve seen at regular intervals.

Now, on Day 25, she appears to be mated and is going through the motions of egg-laying — but no eggs are yet visible.

In fact she has been going through the motions of egg-laying since I first saw her! Practice makes perfect , I suppose.

The books say that mating usually takes place 6-10 days after emergence and that she will start laying 2-3 days after that. Obviously she is behind schedule!

Nonetheless I have hopes that she is now mated and getting ready to lay because of the respect paid to her by her ever-changing retinue. She also looks a little plumper!

Her workers obviously think she has The Right Stuff. 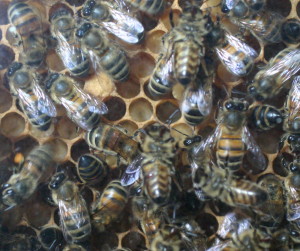 At last! She has successfully mated and is now laying. She first emerged on 17 May, but she didn’t start laying until 7 June at the earliest — and not really in earnest until several days later.

Here you can see the developing larvae — and one sealed cell, though I’m not convinced that it contains a developing honeybee.