It’s all a lot quieter now, but last Thursday for two hours in the evening this little nuc was as busy as any colony I’ve ever seen. 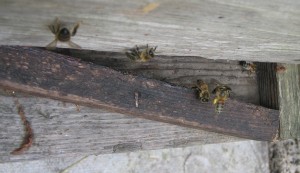 It originated from the caste (secondary swarm with a virgin queen) that I caught last week. On Thursday at about 6pm I removed the virgin and replaced her with a (caged) mated queen that had been about to swarm from another colony. (The introduced mated queen has a beautiful temperament and is quite a good honey collector with characteristics that I much preferred over the caste’s inheritance.)

Within a few minutes, the little colony sprang into extraordinary life. They were so active that I thought perhaps they were preparing to swarm at that ridiculous evening hour. But I watched their flight patterns and realised that they were in fact foraging at a furious rate. By 8pm when foraging was no longer feasible they quietened down and they haven’t been quite that active since.

I can only assume that they were so excited to receive a laying queen sooner than expected that their motivation levels went sky-high on Thursday evening.