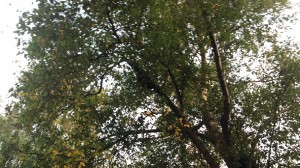 The barely visible swarm/colony high up in a birch tree

My local school reported a fair-sized swarm high up in a birch tree on Friday. That seemed a bit odd because it is so late in the season — unless of course it was an absconding colony escaping a chimney sweep or maybe even from disease.

It’s still there today (Monday) and I am beginning to suspect that it may have arrived some time ago and that it has built comb and set up home. Maybe it’s only recently that the sharp-eyed youngsters have spotted the swarm. It takes some time to find it even when you know it is there because it looks very like a birch tree fungus — except it flies!

The swarm hangs over the corner of the playground and will be quite expensive to move.

What would you do? Leave it to die in the cold weather when it comes or remove it now? I think it’s too late to distract them with a swarm lure (which has proved a useful diversion in the past to colonies that haven’t settled in).