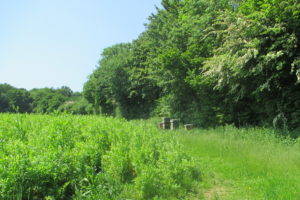 Herb farm bees with a bit of an attitude.

The herb farm is proving a very productive apiary, but the bees are very agitated and we think there is something in the environment that is causing their unruly behaviour rather than being the result of genetics.

You may remember that we shook-swarmed an existing colony in a WBC into a Langstroth hive. Despite the cool spring, the colony grew satisfactorily with some candy as food. At first they were very even tempered, but with size have become more defensive even though they have not quite filled their new brood chamber yet.

I transferred a colony known to be quite docile in its original apiary and it has thrived (now with four supers), but its temper has been unpleasant both at the hiveside and as ‘followers’.

Recently a swarm from an unknown source has been installed in the apiary and already that small colony is being rather unpleasant to visitors.

So, with three colonies with queens from three different genetic lines, I am beginning to think there must be something in the environment that is upsetting them. And I can’t work out what it is.

They all seem very healthy, so I don’t suspect disease which can upset bees’ temperament.

The hives face due south (the prevailing wind is south west), the area is well-drained (with a little stream in a damp little valley behind).

Straight in front of the hives is a field of angelica not yet in bloom, but I can find no reports of bees being irritated by angelica – in fact they should love it when it flowers.

There are no overhead power cables near, but we’re investigating to find if there is anything underground.

There are no signs of disturbance by animals (the long grass around the hives should show animal trails if they are frequent visitors).

We plan to move one hive soon to see if it becomes more friendly in a new environment, but for the moment the bees’ behaviour is unexplained.

Anyone with ideas of what to look for in the environment?