Honey bees never fail to bamboozle me. A colony with a newly-laying queen has emerged from next to nothing. 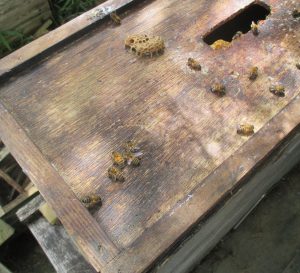 Two queen cells casually left on their sides on the cover board of the nucleus. One turned out to be empty, as if the queen had emerged. The other contained the remains of a developing queen.

I brought a small nucleus with one frame of brood and a few queen cells back from an apiary to install in an observation hive. (I like watching the process of queen emergence in the observation hive.)

There were several queen cells on the frame, so I removed two without destroying them and placed them on the cover board of the transported nucleus.

Meantime I inserted the frame with bees in the observation hive. The original nucleus was put in its usual outdoor storage space. I noticed that a very few (twenty?) bees stayed with the nucleus and the sealed queen cells, but I thought little of it expecting them to abandon the lost-cause colony in a day or two.

A couple of weeks later, I noticed some early morning activity around the nucleus while another nearby colony had yet to make an appearance for the day. I thought that was curious, but didn’t investigate immediately.

The activity around the no-hope colony steadily increased over the next few days and today I investigated, thinking that a swarm must have entered.

In fact the tiny colony has a laying queen – she has just started to lay eggs – and a great many more bees than it started with! From a start of twenty, the bees probably number in the very low hundreds. But the queen didn’t lay them – she has only just come into lay.

So, the extra bees must be volunteers or recruits from other colonies! Why would some bees leave their populous homes to pioneer with this minute colony?

I have considered the possibility that a very tiny caste colony has moved in, but that doesn’t quite fit. Firstly, the increase in activity over many days has been gradual rather than sudden. Secondly, of the two queen cells left on the cover board, one still has the remains of a queen, but the other is empty as if that queen has emerged.

Today, the colony is doing very well. They are building comb on frames that were destined to receive new foundation. The photo below shows the queen, the new comb and is half the colony that started with about twenty bees! 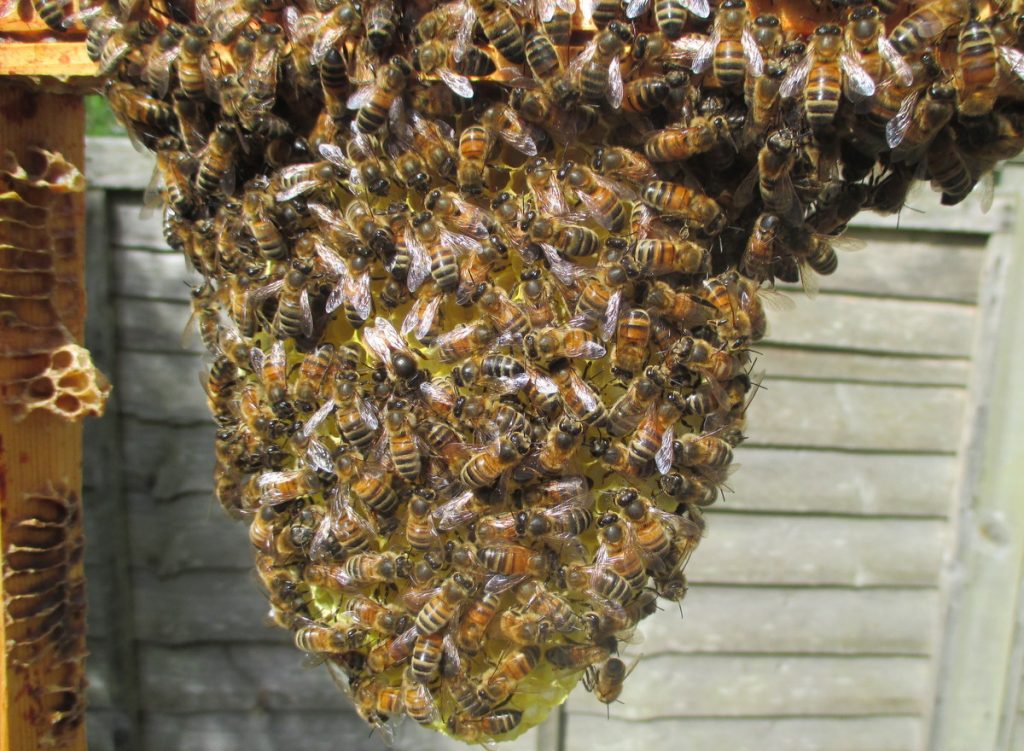 The new queen’s thorax is visible just left of centre in the middle of the photo. This is one frame of the now two-frame colony.