More Than Honey more than impressed 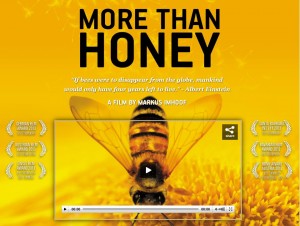 Last night near Vita’s HQ in Basingstoke, England, Basingstoke College of Technology kindly provided the venue for a pre-release screening of More Than Honey for local beekeepers arranged by Vita.

The audience was enthralled. It’s a very special film with some truly remarkable footage of honeybee activity contrasting sharply at times with humans making big profits from the work of the honeybee.

“Listen to that”, says a bee farmer amidst the very loud buzzing in California’s spectacular almond orchards, “that’s the sound of M-ONEY” with an emphasis designed to startle.

Filmed and directed by Oscar-nominated Markus Imhoof, the movie is at turns both moving and shocking as we see beekeeping around the world.

We see some of honeybees’ most intimate moments in magnificent close-up and clarity: the emergence of a queen bee from her cell, her mating on the wing amidst a drone congregation in the high Alps, and a bees’ eye view of foraging and entry into the hive to deliver the nectar. The film is worth seeing for those images alone.

But we also see the harsh realities of commercial beekeeping which will probably startle and shock hobbyist beekeepers managing just a few hives. And in a part of China we witness pollination by hand — because bees have ceased to inhabit the landscape.

No finger is pointed at any one cause of recent bee declines, although man’s exploitation of nature is seen to be at the root of the ills.

This video is most certainly worth 90 minutes of every beekeepers’ time. You can buy it from next week for about £10 in various formats from the usual outlets.