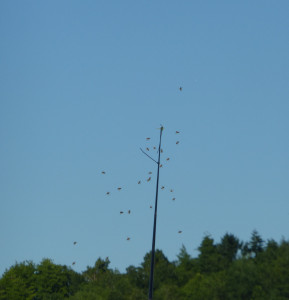 Three days after my first apparent discovery of a Drone Congregation Area (DCA), a fellow beekeeper and I set out to confirm what I’d seen.

It was a hot Tuesday afternoon (yes, England can be hot), just after 3pm, with a firm high-pressure system breeze coming in from the north-east.

When we first reached the area with the queen pheromone on the end of a fishing rod, there seemed little of interest. But quickly the drones started to build up. I don’t know whether it was the lure attracting them or whether it was the time of day.

There were even more drones this time. They almost seemed to be rising out of the barley field. They were very low flying skimming just a few feet above the ripening barley heads. Perhaps they were keeping out of the breeze.

It soon became apparent that the lure was at its most effective at about 3 metres above the ground, not the several metres suggested in the literature. 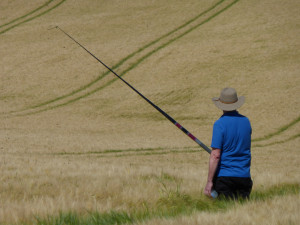 The noise of the drones’ buzzing was impressive! If you look very closely in the photos, you can see black specks throughout the pictures. They are drones and not camera lens defects.

Again, the area seemed clearly defined and the same as before although I was limited in my search by having to stick to tractor tramlines within the crop. (I’ll be back after harvest to mark out the territory more precisely.)

After a while, there was no need for the lure, as the drones were plain to see. They often travelled in groups and these may well have have been drones chasing queens. If they were chasing queens there were a surprising number of queens on the wing given that the immediate area doesn’t have many beekeepers.  Chris who was with me and taking the photos thinks he actually witnessed a drone mounting a queen. 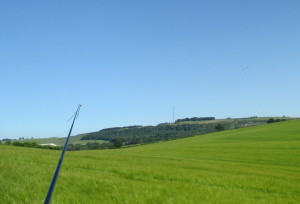 The general area of the DCA on chalk downland.

After a mesmerising hour, we moved on to other areas. More about that in Part 3.