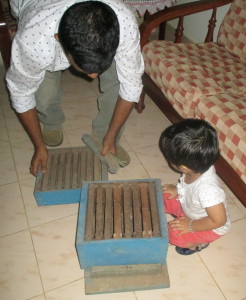 Besides the dammer bee, India and South Asia has another tiny bee: Apis florea, also known as the dwarf honeybee.  Measuring 7-10mm long, it requires only a mini-hive, although unmanaged they nest in the open on tree branches.

The hive pictured on the right dates from the 1950s is like a miniature Apis mellifera hive used in Europe, but it just happens to be constructed with teak. I think it’s even heavier than a cedar Langstroth hive!

The owner of this hive on a coffee estate in Coorg, near Mysore, is hoping to start beekeeping, but has had no luck in attracting a colony yet. A Vita swarm lure may be in order!

Apis florea usually follow the forage and are regular absconders. In that way, they can probably avoid the heaviest of the monsoon rains and probably cleanse themselves of unwanted hive pests and pathogens every now and again.

Apis florea is a very good pollinator and will therefore thrive on the coffee blossom when it appears in a few months’ time.

The hive has obviously seen action on the estate before. A hive stands await with a specially designed trough for water at the base to deter ants.

The dwarf bee has at least one distinct trait to the western honeybee. Its dances to indicate forage locations are not on the vertical comb, but on the horizontal tops and the waggle dance is a straight run in the direction of the forage. I wonder how they cope with man-made framed hives as a result. 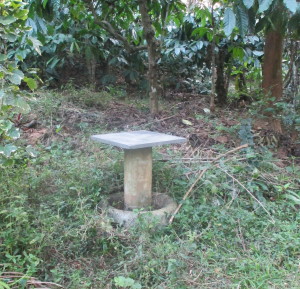 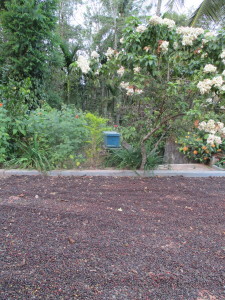 A teak hive ready for the next coffee blossom season as this season’s Mysore coffee crop dries in the sun.