First inspection and a mystery bee 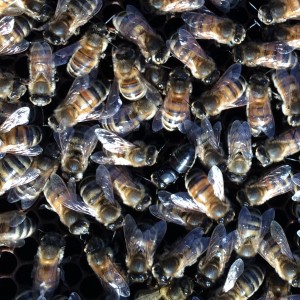 The temperatures rose to 15C yesterday in Hampshire in England, so I was able to open the hives safely for my first time this season.

And the news is good — all seven colonies have come through with a laying queen and healthy brood pattern. Some were getting a little low on stores, but a few frames of stores inserted in a few colonies should avert any problems. The extent of brood ranged from 3 sides in a nucleus to a staggering nine sides in a large colony that had been united from two colonies last autumn.

There was one peculiarity, however. I almost mistook one bee for a beetle. But no, it was a honeybee, just very, very black for some reason (see photo).