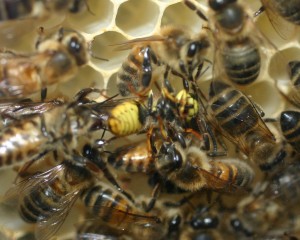 A wasp dared to enter the observation hive and had a torrid time as a result. I watched the hive on-and-off for at least two hours as the wasp was chased around the hive having tussles (like this one in the photograph) along the way.

Eventually the wasp was trapped with its head hanging over a bottom bar and its body above it as the bees explained that its presence in the hive was unwelcome.

I last saw the very disoriented and clearly injured wasp in the plastic exit tube being brushed aside as the bees went about their business. It was so confused — or perhaps drawn by the smell of honey —  that it would try to go back towards the hive when the bees rushing passed it allowed it to move anywhere.

I didn’t see its final and inevitable demise. I wonder how long it actually underwent its harassment and am surprised that it wasn’t actually killed outright, just mortally wounded.