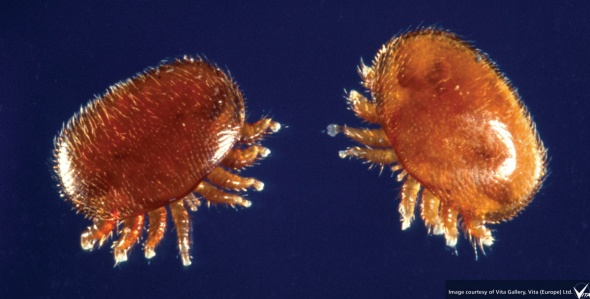 The fastest and most definitive way of testing the effectiveness of treatments to control the varroa mite, the scourge of honeybees, has been developed by Vita (Europe) Ltd with a team of researchers at the Aristotle University in Greece.

This new ground-breaking bioassay is reducing testing time from potentially days to hours, and it is so sensitive that it can be used to identify mites resistant to specific treatments. Relatively small adaptations should also enable it to be used with a wide range of insect pests.

“This new bioassay is a real step forward that will help in the fight against varroa and other honeybee pests,” said Dr Max Watkins, Technical Director of Vita. “By speeding up laboratory tests, the whole R&D process becomes even more efficient and it should help us to get our honeybee health products to market just that little bit faster.

“Its sensitivity will also help us in the early identification of varroa mites that may be becoming resistant to specific treatments. This fact alone is likely to have a significant impact on the development of varroa control treatments. The low cost of the bioassay and its simple and elegant methodology mean that there are no significant barriers to its general use by R&D laboratories.”

The new bioassay procedure involves securing a varroa mite upside down and placing a tiny sensor on its sternum. When upside-down, the reflex action of the varroa mite (like other invertebrates and vertebrates) is to try to right itself. The resulting rhythmic pulses of the mite are measured by the sensor and represented on a graph. Any harmful effects of the treatment will change the reflex action of the pest and the resulting graph can then be compared to a normal pattern.

Here is a video showing how the bioassay works:

The new bioassay also works with bees, wax moths and other insects and is therefore a very significant step forward for the pest research and development community. It is also an important step forward in examining arthropod behaviour in general. Vita plans to use it, with the Aristotle University of Thessaloniki, in many of its future investigations and for all the pest control treatments it is developing.

Dr Watkins continued: “Whilst extravagant claims are made of several varroa-treatment products, remarkably few undergo the strict regulatory regime that assures purchasers of their effectiveness and safety. Vita customers, however, can be assured that Vita’s methods are at the forefront of scientific research.”