First varroa treatment approved for use in Australia 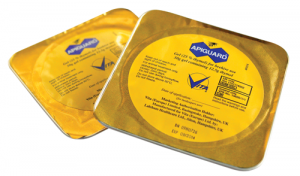 Apiguard, the organically-approved varroa control treatment from Vita (Europe) Ltd, has just been approved for use in Australia. It is the first varroa control product to be approved by the Australian authorities.

Based on thymol and delivered in a slow-release gel, Apiguard is extremely easy to use and very effective in controlling varroa populations. It is a proven worldwide success, has been through a rigorous authorisation process and is successfully used in up to 60 countries across the globe.

Dr Max Watkins, Technical Director of Vita (Europe), said “The timing of the approval of Apiguard for use in Australia has coincided with the sighting of varroa in Queensland. We hope that varroa incursion can be controlled, but, even if it can’t, Apiguard is now Australia’s first regulatory-approved treatment enabling beekeepers to control the varroa population. Once firmly established, the pest cannot be eliminated, but it can be controlled and it is possible to maintain healthy and productive colonies.”

Apiguard comes in 50g aluminium trays (two will treat one standard colony) which, after opening are placed in an eke (or similar spacing device) directly on top of the brood box. After 10-14 days, the tray is removed and replaced by another for a further 2 to 4 weeks so that the treatment can be effective across two brood cycles.

Apiguard works best in temperatures above 15°C, but is effective at lower temperatures. In warmer conditions, above 25°C, it is recommended to use a smaller dose, repeated, at one week intervals. See the Apiguard FAQ sheet on the Vita website for further information.

For full details on using Apiguard including a video and FAQ, please see www.vita-europe.com