Take your bees to work week 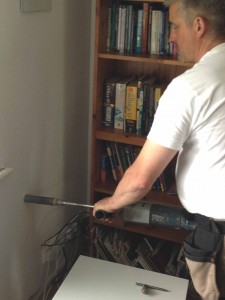 Drilling the hive entrance. A short plastic tube will link the bees to the outside world.

I’ve had bees in the garden for many years, but now I have bees in the office. I’ve been thinking about it for a long time, and I’ve finally had a hole drilled in the office wall to install an observation hive.

In preparation, I didn’t find a great deal of literature on observation hives, though Karl Showler’s book The Observation Hive is very useful.

Essentially, an observation hive can be a cross-section of a hive, but of course it’s only a thin cross-section, so it’s important to minimise the stress on the bees in creating a colony that is small but sustainable for a period of time.

I decided to start by splitting a queen-making colony in the top half of a Snelgroved Langstroth colony. I took one brood frame along with two super frames inserted them an in a travelling box to bring them  to the office for transfer into the observation hive. The bees that didn’t want to stay on the frames during the transfer soon wanted to be part of the action and dutifully went in through the entrance (see picture below)  before I transported the hive to the first floor office. 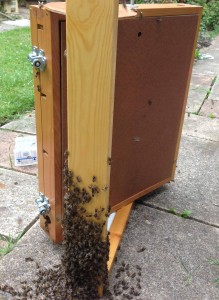 Residents move in. The glass is covered by boards to cut out light and mimic the interior of a normal bee nest. They are only removed when I want to see what's happening.

The colony has two sealed queen cells and one or both queens should emerge any day now. Even after a few days, I’ve learned a lot about bees that I never knew before.

During very dull days, even with temperatures above 15C, they had no desire to go out, but as soon as the sun re-emerged they became very excited and the flights began.

I’d expected to see a lot of pollen coming in in preparation for the emergence and mating of a queen, but the bees seem in no particular hurry and I’ve yet to see much pollen coming in. The few pollen carriers have been showing off their bee dances to any bee that will pay attention.

One thing is very obvious: the queen cells are getting a lot of attention, probably to regulate exactly when the virgins emerge. By working around the outside of the cell, the bees can apply wax and propolis if the queen is nibbling away inside the cell trying  to emerge.

I suspect there will be a few stories to tell as the colony progresses. 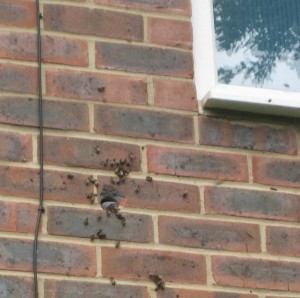 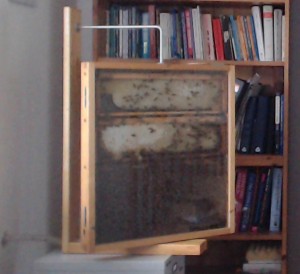