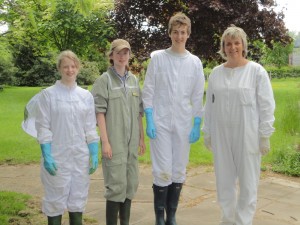 We’ve just heard back from Serena Watts who chaperoned the British team at the 4th International Meeting of Young Beekeepers in Muenster, Germany. It’s an event with competitions, games, eating and drinking (not alcohol of course!) and 140 participants from 14 different countries. This year’s venue was in the heart of the European reserve Rieselfelder, Münster, “a 450-ha natural experience area”.

«Having examined for the Basic Exam for the last couple of years I was asked if I would help select this year’s team of three to go forward and represent the UK. This is only the fourth year it has been held so when they said they needed a chaperone I said – oh pick me! Amazingly they did!

«BBKA covered the cost to and from Muenster and thereafter Germany covered everything.  We had a great time and all topped off by finding out that we actually came 4th out of the 14 countries.

«It was quite an adventure. The three were made up of Elsa Cavill (14) from Hampshire who went last year and so was team captain, Lewis Thomas(15) from Windsor and Georgia Sellars(16) from Lincolnshire.

«Vita kindly donated the swarm lures as a gift for the other countries. This not only went down well with everyone but they were also small enough not to impact on our luggage.

«What an amazing reason to gather teenagers together from so many different countries — all because of bees. This I see is the future of beekeeping and something we should promote further. How great would it be for the UK to host it one day!

«It will Poland next year! I believe the selection process will be starting in August/September.»

Watch out for a full report of this year’s event in both BBKA news and Beecraft next month.