The bees are back 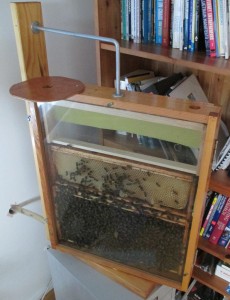 The bees have returned to the office and are thriving as the summer nectar flow has just started.

They were dancing this morning and it seems that they have already found the lime tree blossom down by the chalk stream, just 200 metres away.

The colony (frames were selected from a queen-making colony)  is queenless, but initially they had two queen cells, one sealed, one unsealed, on which to build their future.