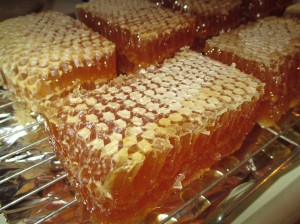 Can you identify this rather distinctive honey? Here are some clues: its aroma fills a room, it’s thixotropic, it’s very late season and in the UK it’s often called the king of honeys.

Yes, it’s heather honey — ling heather honey from the New Forest in Britain to be precise. The harvest is seldom large, but the quality makes up for that and it fetches a premium price (although I can seldom bring myself to sell it).

It’s not much fun extracting it because it is a gel and won’t turn to liquid unless it is stirred — and only then will it remain liquid for a short while. So a spinning honey extractor is of little use. The honey doesn’t respond that well to heating either, so eating it from the comb is the most satisfying solution.  (My favourite is with fruit and Greek yoghurt.)

I took two hives to the New Forest in August and despite that cold month, each colony has produced about 12 kgs (c25lbs) each — enough to see friends and family through winter.

The colonies are just about ready to come home now to their usual apiary, but will need to be thoroughly inspected to ensure that they aren’t going to bring back any diseases from mingling with all those other holidaying honeybees in the New Forest.

For those unfamiliar with England’s New Forest: it’s neither new nor much of a forest. it dates back almost one thousand years when a Forest meant a hunting ground. Today it is one of the largest remaining unenclosed tracts of pasture land, heathland and forest in the densely-populated south of England.