What a lot of bee auction bargains

Two hundred lots were up for auction, some mainstream some quirky, and many bargains

Honeybee health was a top priority. The live bees had been inspected for disease and several lots of bees were refused because they had been submitted too late for inspection.  Much if not all of the hive equipment had been scorched to nullify any potential bee disease spread. 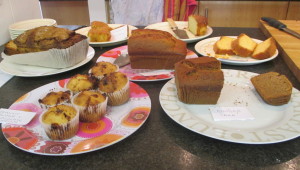 And of course there was something that everyone came for: the superb soups, bacon butties and cakes — all delicious and also available at bargain prices.