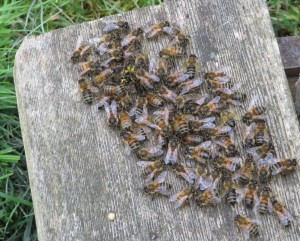 Wasp alert (If you click on this photo a few times, an enlarged version should appear.)

I was sitting having a coffee in the garden yesterday morning when I noticed a scuffle on the landing board of the small nucleus nearby.

I went over to see what the mayhem was about and there was a wasp being escorted away off the premises. Well, perhaps escorted is too mild a description — the workers may have been trying to cook it to death by clustering around it and forming a tight, highly heated ball.

The wasp was hard to see in the writhing mass of bees — the picture left is the only I took with the wasp visible.

The ball moved towards the edge of the landing board and fell over, still clinging to the edge. Eventually the ball hit the ground and I think the wasp escaped.