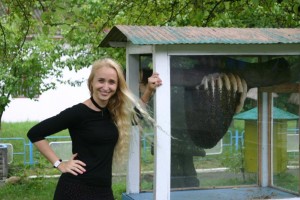 Svetlana Pantyukhina, manager of Vita CIS in Russia, tells us that there are about five million colonies of bees in modern Russia. Professional beekeeping is common with some of the biggest operations managing between 1000 and 5000 colonies. But everyone has been hit hard by the Rouble exchange rate crisis and times are difficult.

Varroa, Nosema and viruses are the chief disease concerns and have been exacerbated over the past decade by honeybee imports from neighbouring countries. Government support for beekeeping has decreased and honey prices have dropped, so current economics mean that beekeepers struggle to maintain healthy colonies. One fear is that some beekeepers may be resorting to home-developed and unregulated treatments because of the high import costs.

However some beekeepers – mainly large beefarmers – are showing a growing interest in organic beekeeping. These beekeepers are therefore very interested in Apiguard as an organic Varroa control treatment and Vita Feed Gold for the health benefits it can bring and other Vita products.

One of the prime beekeeping areas in Russia is near the Black Sea, where the warmer climate and mountain herbs and crops produce fine honey. However Varroa resistant to first generation treatments have appeared and beekeepers are facing extra challenges in controlling the mite.

Elsewhere of course, the Russian winter means that honeybees have to be tough to survive. In many areas, they must be insulated and even brought under cover to survive the fierce winter from November to March.