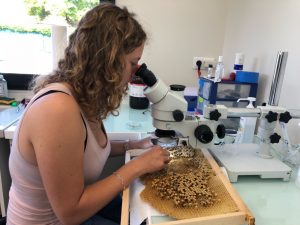 Hotspots of varroa resistant to many treatments have developed over years of use and mis-use. While the basic principles of resistance to treatments are understood, the details remain a mystery as bees and beekeepers face an adaptable pest.

In France, Gabrielle Almecija, a PhD student at the University of Tours, has recently begun a three-year research project about resistant varroa. Part-sponsored by Vita Bee Health and Apinov (Vita’s partner in France), Gabrielle is already studying varroa in Brittany where resistance to some treatments seems low, and varroa in the Alps where resistance seems high. Why there should be such a difference is far from clear, but it is typical that there is considerable variation between geographical areas.

As the first stage of her research, Gabriele will be lab-testing varroa mites to define levels of resistance: how much of a treatment is required to kill a certain proportion of mites? At the moment, she must travel to and from each area, but plans to establish a protocol, a reliable scientific method, by which the time-consuming travel will not be required.

Once resistance levels can be defined, possibilities for further research and practical action open up. Just four months into the research, Gabrielle’s work is showing great potential.

This honey bee-related project is not Gabrielle’s first encounter with bees. Previously she has studied and has given presentations on urban forage in her home area of Marseilles and has studied brood disease and queen breeding. It was in La Rochelle that she first met Benjamin Poirot of Apinov who is helping to supervise her PhD.

Here’s a gruesome glimpse at what she is finding: