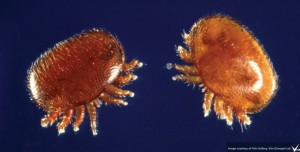 Beekeepers across Britain are reporting very high levels of varroa mite levels early in the season. Vita urges beekeepers to be vigilant and suggests a smart use of Apistan to test infestation levels and to reduce the varroa mite population while undertaking swarm management.

Dr Max Watkins, Technical Director of Vita (Europe) Ltd, explained: “After several seasons during which varroa mite numbers have seemed to have been contained, this year’s mild winter seems to have given them a major boost. Because many queens may have reared brood and therefore varroa throughout the mild winter, it seems that varroa mite levels have started the season at much higher than normal levels.  As the season has progressed the breeding of varroa has accelerated and unusually high levels are being reported very early in the season. Without some sort of check on the varroa mite population, many colonies will be at high risk in July and August.”

Apistan can be a very useful tool both as a 24-hour test of levels of mite infestation and in the slightly longer term to treat the colony during swarm control management.

To test for varroa mite infestation levels, beekeepers should insert two Apistan strips for 24 hours in a colony with a varroa screen to trap the fallen mites. If the varroa mite-drop during the 24-hour treatment period is 10 or more, beekeepers need to consider their full treatment options. The Apistan will only have knocked down the mites on the bees and since some 70-90% of mites will be in the brood, the knock-down number is only a proportion of mites in the colony. A longer Apistan treatment would be required to kill the mites in the brood.

If no mitefall is seen with a short use of Apistan, it is possible to double-check, in case of high pyrethroid resistance, by sprinkling the bees with icing sugar, for example.

Treatment with Apistan of newly created artificial swarms (without brood) will usually clean a colony of well in excess of 90% of its mites within a few days. The Apistan can then be removed and supers put in place as the colony requires them.

The queen-making split of the colony ( with brood) can be similarly cleaned over a period of three weeks as no new brood is being created and most of the varroa in the sealed brood will be killed as it emerges during the three week treatment period.

In this way, swarm-managed colonies can be protected even in a season when varroa mite populations start at high levels.

Fears of creating resistance to Apistan treatments may not be a concern for beekeepers who have been alternating treatments (ie using an Integrated Pest Management strategy). Recent research at Rothamsted indicates that resistance to the active ingredient of Apistan and other similar treatments does not persist if there is a significant gap of a few seasons between treatments.