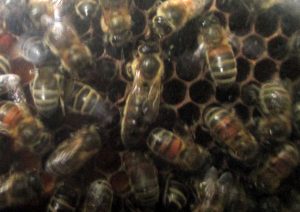 I’ve been keeping very quiet about this, but now I can speak (writes Vita’s Guest Blogger).

Last autumn, I ran out of time to unite the observation hive colony with an apiary colony. To make matters worse, the colony had hardly any food – not a single sealed cell of honey. I was due to be away over for three weeks over Christmas, so the heating would be turned off. They were doomed!

Feeling guilty, I gave them some sugar syrup in the autumn. The queen had gone off lay in November. I went away for Christmas and on my return expected a sadly deceased colony. But, to my amazement, they had survived. I could see the queen but no brood. I gave them a little more sugar syrup. Foraging days were virtually non-existent.

By mid-February, the colony was very slowly declining in size but still alive. There was no brood, though.

Then at the beginning of March, I noticed some larvae. The queen had been off-lay for about four months, so I though perhaps she could or would never lay again.

Today and yesterday, they have been foraging eagerly. Pollen has been pouring in at a startling rate for such a small colony It looks like they will survive. What a resilient species!