Time for varroa treatments but no time for complacency

Now that the honey flow is coming to a close, it is time to treat for varroa mites. Anecdotal reports from northern Europe suggest that varroa mite populations may be relatively low this season, but it is vital that beekeepers are not complacent. It could be that sustained and regular treatment with approved products over several years is having regional or even national impacts and it is therefore extremely important that  those treatments continue. 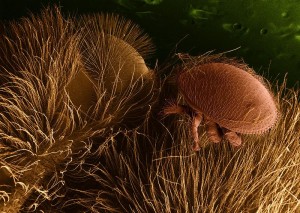 Close up of a varroa mite on a honeybee. Photo courtesy BetaTec.

Dr Max Watkins, Technical Director of Vita (Europe) Ltd, explained: “Initial anecdotal reports in northern Europe suggest that varroa populations may be relatively low this season, but we would like to hear many more reports before we can be sure of that.

“If these reports are representative, it could be the result of two factors. Firstly, the late spring may have delayed the breeding of varroa, just as it delayed the development of honeybee colonies.

“But, secondly, it could also be that sustained treatment with regulated products over many seasons is inhibiting the development of large varroa mite populations over the longer term. We know that there are few feral colonies around now to act as reservoir for varroa mites and that some beekeepers have lost colonies through inadequate or no varroa control management.

“We have also noticed that in countries where Vita products are popular, the varroa situation seems under relatively good control. In contrast in other countries or areas where Varroa treatment is spasmodic or with non-regulated materials, colonies seem to be experiencing greater problems.”

The safest way to proceed is clear: treat regularly using approved IPM products and methods.  In the Vita product portfolio that means treating each season alternately with Apiguard and Apistan — where there is no resistance to the active ingredient of Apistan.

Although there has been evidence that regionally some colonies have become resistant to fluvalinate, the active ingredient of Apistan, and some other first-generation varroa control products, there is also evidence that Apistan is becoming effective again in areas which have not used Apistan for a number of seasons. There is a quick rule of thumb test for resistance to Apistan here on the Vita website.