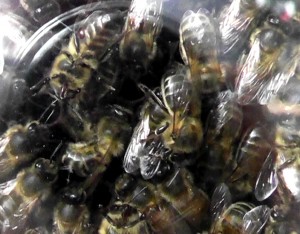 Varroa mite on bee in top left of image.

I was just beginning to feel very pleased that I hadn’t seen any sign of varroa mites in the observation hive, when one of the little pests was exposed.

I was videoing a bee being groomed (perhaps for varroa) centre-screen when the underside of another bee came into view (top left). And yes, there, as plain as could be, was a varroa mite clinging to its underside. There might even be another mite on the wing of the adjacent bee,