Test Yourself: Beekeeping in the European Union 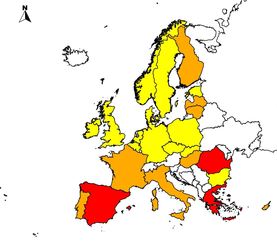 Insight into European beekeeping is presented in a fascinating article by Marie-Pierre Chauzat et al in PLOS ONE,  the highly respected biology publication. A few questions and answers should show why it’s such a good read:

Which EU country has most colonies?
Spain: almost 2.5 million.

Which EU country has the highest percentage of professional beekeepers?
Kosova: 88%

Which country has the highest yielding colonies?
Finland: 4 tons per 100 colonies

Which country gets most honey for its size?

Which country exports most honey?
Germany: 20,000 tons per year

Which country imports most honey?
Germany: 90,000 tons per year

Which country produces most queens?
Italy: 350,000

After varroa, what is the biggest killer disease?
American Foulbrood

Lots more statistics in the PlOS ONE article, Demographics of the European Apicultural Industry.