Tanging doesn’t do it 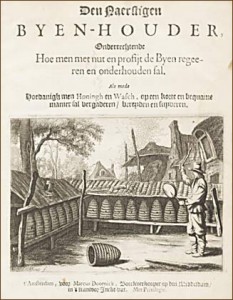 A cover in the Moir Rare Book Collection http://digital.nls.uk/moir/tanging.html

You could almost hear the groan of disappointment as beekeepers read the latest research on tanging — it doesn’t work!

Tanging is a traditional, if eccentric, way of attracting swarms. The idea is that if you bang pots and pans or other suitably noisy instruments together as a swarm emerges, it will settle quickly and can then be re-hived instead of flying off into the great unknown. Tanging also has the benefit of alerting (and almost certainly annoying) the neighbourhood when a swarm has taken to the air.

Alas, Michael L Smith in the December 2013 issue of IBRA’s Journal of Apicultural Research has trashed the notion in a small study of swarms. He says tanging has no effect.

Beekeepers are distraught! As someone on the Bee_L discussion board noted: “Such noisy antics help us beekeepers to maintain our image of eccentricity”.

But perhaps a little more research is needed, given that some Vita research with its swarm lure has indicated that prime and secondary swarms behave in a different fashion.

There could be hope for tanging yet! Meantime, we suggest that you try Vita swarm lures.