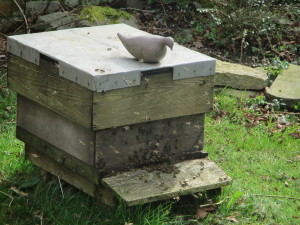 The nucleus now in a full-sized brood box.

The importance of site location even within a few kilometres has been dramatically demonstrated to me this spring. I have three apiaries — one in a garden in a village and two on agricultural land, four and six kilometres away. Guess which is striding ahead despite being the smallest starter?

It’s been too cold to inspect colonies hives in this area so far this season — quite a contrast to previous years when I could open hives in mid-March — but, from what I can tell, this is the situation:

Apiary 1 in a windy exposed site: they’ve been gobbling food quite quickly according to the hive debris and hive-hefting, but their numbers are low. Nonetheless all seems healthy. 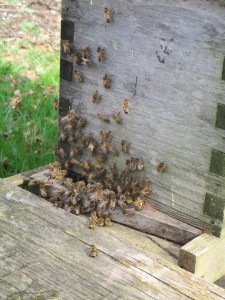 The garden nucleus ten days ago.

Apiary 2 in a sheltered copse: they have plenty of food, not consuming as much as colonies  and seem to be progressing steadily.

Apiary 3 in a sheltered garden with village forage: has rapidly expanded from a nucleus to a full-sized (Langstroth) brood box. And since being given more house-room they seem to have stepped up a further gear!