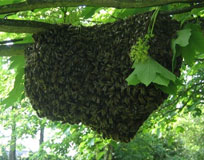 Now that spring has arrived in the northern hemisphere, swarming looms and Vita swarm lures are being readied for action. But how do those swarms find their way to their new home?

Tom Seeley (author of Honeybee Democracy) has discovered how scout bees direct a swarm to its new home in a fascinating piece of research just published in Bee Craft April 2015.

Question 1: Do pheromones from the nasonov gland guide the swarm to its new home?

Question 2: What are those streaker bees flying rapidly at the top of the swarm?

The answers are fascinating and the research design is rather special.

In short: scents from the nasonov gland seem to help the bees move more quickly to their new home. They arrive there twice as quickly if their nasonov glands aren’t temporarily disabled. But clearly they are not the only guiding factor.

The streaker bees appear to be the guiding lights. They are the scout bees — just 4% of the swarm that actually know where they are going. They fly at the top of the swarm very quickly and pull the “ignorant” bees on to the straight and narrow towards the final destination.  They act almost like a Tour de France peloton, flying speedily at the top of the swarm where they can be clearly seen, then dropping down into the swarm and making their way to the back before launching streaker flights up top again.

The article is well worth reading for the greater detail and for the questions that remain unanswered.