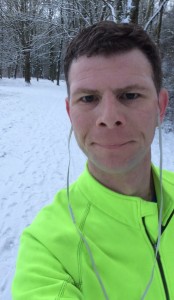 Sebastian’s marathon training selfie – it was a bitingly cold morning!

Sebastian Owen, Vita’s Commercial Development Manager, is enduring all sorts of British winter weather in his training for the 2015 London Marathon in April.

He would welcome support — moral and otherwise — from beekeepers in his bid to raise funds for Mitanya, a trust that aims to break the cycle of poverty in the rural Mityana district of Uganda.

The Mitanya Projects Trust is based close to Vita’s offices in Hampshire, UK, and focuses on very practical projects such as providing sewing machines that can have an immediate and lasting impact. Projects always start small to make sure they work before funds are committed to expand them on a wider scale.

Sebastian is under no illusions of the glamour of running in the London Marathon: “The 4+ hours of the marathon and the countless training miles are going to be hellish for me, only made bearable by the thought that your donation will be of so much help to people that desperately need it.”

Uganda is one of the poorest countries in the world and poverty is most entrenched in rural areas.  Even small donations can make a big difference in Uganda, so please support Sebastian if you can.

Donations can be made here.

Sebastian was one of the lucky 30,000+ who won a place by ballot to run in the London marathon, ranked as one of the six top world marathons. We hope he feels very lucky as he trains!

His latest training run was from his home village of Whitchurch across the top of the famous Watership Down, passing a number of beehives, to Ashford Hill — to give a talk about Mitanya when he got his breath back! 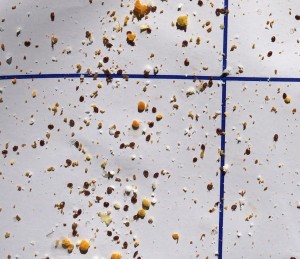 A wintery tale of two colonies 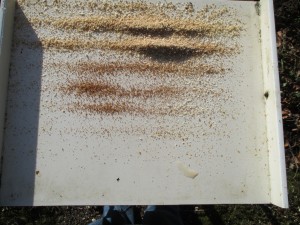 Here is the debris contrasting drop of two colonies in two neighbouring, but different apiaries in southern England after six days in January. Why the difference?

The first picture is from a colony obviously munching through its stores in an apiary exposed to winds.

The second picture shows a much less active colony in a more sheltered location with plenty of stores onboard.

Quantity of debris aside, there is one subtle, but significant and somewhat alarming difference: in amongst the second colony’s debris there were six dead varroa — and none in the first. I’m not happy to see a drop of six dead varroa in six days in winter. That is most unusual for my colonies.

I don’t like opening up colonies in winter, but the second will be inspected as soon as warmer conditions prevail! Varroa treatments will be at the ready! 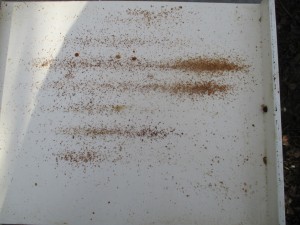 There are a number of possible explanations of the differences in the debris fall – who would like to speculate?

(The debris is collected in a standard varroa screen.)

Turlough, Vita’s Guest Beekeeper Blogger
Views expressed in this blog are not necessarily those of Vita (Europe) Ltd. 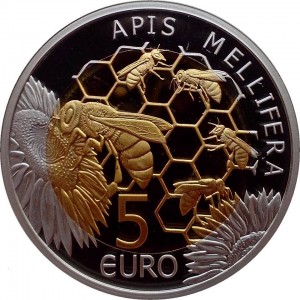 The coin is a part of ‘Fauna and Flora in Luxembourg’ series which started in 2009.

The coin is made of Nordic gold and silver, but unfortunately it cannot be acquired for its face value.

A total of 30,000 were minted in Utrecht and the going rate seems to be about €60 complete with accompanying booklet and presentation case.

And then there were none – tales from the observation hive 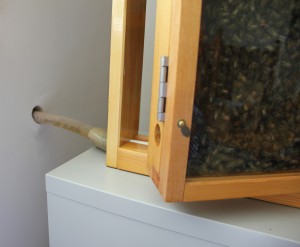 The exit through which the bees made their late season escape.

The year 2014 was a peculiar one on the observation hive and the ending was rather odd too.

The queenless colony dwindled and it did so in two rapid surges. One day early in November there was a queue at the nucleus hive in the garden – and suddenly about half the bees in the observation hive had gone. A large group of them had obviously decided to move en masse.

The second move involved the quite small number of remaining bees, but it was very decisive! At the end of November, there was one day of very heavy continuous rain . Then, as darkness fell, the clouds cleared to greet a very heavy frost. Overnight all the remaining bees disappeared!

In the morning, the observation hive was completely empty. There were no dead bees, so either in the torrential rain or the heavy frost, they made a dash for it.

Perhaps they entered the garden nucleus. Perhaps they died in the attempt. I simply don’t know!