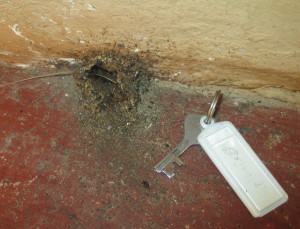 A dammer bee nest. The key is pointing at one member of the colony.

I thought India had four types of honeybees, but on a trip last month I discovered a fifth which is so small it is all too easy to overlook, but its honey is highly prized in Indian medicine.

It’s very tiny (3mm long), has no sting and I was shown two nests: one in a house wall and another in an electric fuse box. I had walked past both without noticing them at all.

They can produce up to 700 gm of honey each year, but this small amount can fetch very good prices: about twenty times the price of other honeys because it is favoured in Ayurvedic medicine. Unfortunately, I didn’t get to taste any, but it is said to be not overly pleasant.

The dammer bee has no sting, but it can fend off unwanted intruders with its bite, sometimes mixed with propolis for added irritation.

As well as producing valuable honey, the dammer bee is of course a very good pollinator. Both of the nests I was shown were on coffee plantations in southern India, one in Coorg, Karnataka, and the other at Ecoscape in Tamil Nadu.

There seems to be a growing interest in dammer bekeeping and some new style dammer beehives are being developed. But as you can see below, the dammer bees have their own ideas of ideal nesting spots. 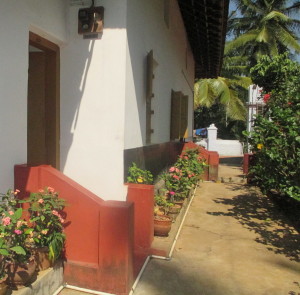 The dammer bee nest is in the electric box above the door to my bedroom in Coorg, Karnataka, India. 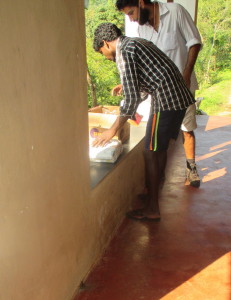 The entrance to the tiny nest can be seen at the foot of the wall at the bottom of the photo. The house is in a valley near Wayanad, southern India. 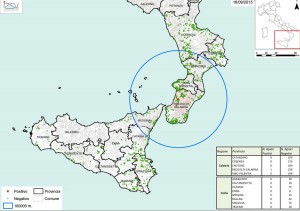 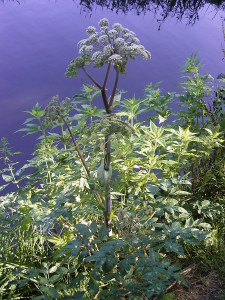 A friend and I were lucky to be invited to put some hives on a local herb farm next season. Tucked away between the country roads, the farm is about 400 hectares growing a fascinating selection of herbs for their drying and oil production. Because extensive herb growing is so rare in this country, we’re not quite sure what to expect. But we do know that the area is rich in bumblebees so that should prove an interesting distraction.

My usual bible of plants and honeybees, the wonderful Plants for Bees, isn’t much help for once! The herbs are so rarely grown in quantity in Britain that not much is known about their usefulness to honeybees here.

The most interesting may be Angelica. One Chinese vendor says that the honey from angelica is:

rare and valuable …. Its colour varies from rich brown to brownish with a red tint, sometimes … with light greenish tint … It has a fairly sharp specific aroma, some bitterness and leaves a well pronounced bonbon aftertaste.

Angelica usually flowers in June/July, but the grower suggests that the crop on the herb farm flowers early.

The mint should prove interesting. It is a very rare old English variety (Black Mitcham) destined for chocolate! Like most mint, it flowers late in the year and, according to Plants for Bees, mint flowers can yield honey where it grows in quantity (rare in this country). August should prove interesting, then, as the nectar flow is usually long gone here by then and the bees should be able to focus on the mint. The honey is reported to be amber in colour with a minty taste which disappears with time (rather than thyme).

There is some coriander. Unlike its cooking components, the nectar seems to yield a delicate honey that is light amber and crystallises quite quickly. I think its flowering time is likely be quite late in the bee season.

Lovage is also grown and seems to be popular with bees, but I cannot find any reports of the honey produced.

There is also lots of chamomile, but it is of no interest to bees and, I’m told, doesn’t even produce seeds. The parsley will flower in its second year, but may be harvested before it gets to that stage.

I will let you know what happens and try to arrange some pollen analysis to see if the bees are working the herbs or finding more interesting wild plant and tree honey – not to mention whatever other crops farmers may be growing in the vicinity. It may of course be a race between the herb harvesting and flowering. 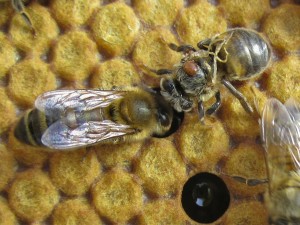 Over the past few years there have been dramatic headlines about what seem to have been Varroa-resistant honeybees in the apiary of a beekeeper in Swindon, England (not far from Vita’s HQ).  Ron Hoskins’ bees have been dubbed “super bees” and it was thought that their hygienic behaviour was the reason for their success. 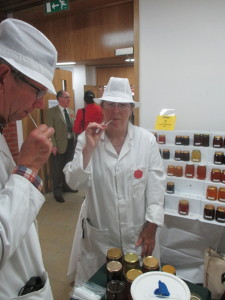