And there she was – gone! 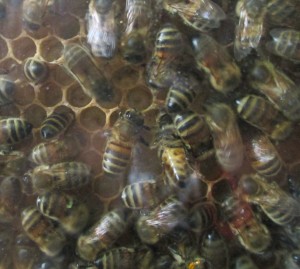 A frame with eggs and larvae!

The observation hive isn’t quite working to plan this year.

Last month, I installed two super frames and one brood frame with one sealed queen cell in the glass hive. All seemed to be going smoothly and the queen seemed to emerge from the cell, but she proved exceedingly difficult to spot. Well. impossible to spot might be more accurate. Meantime two suspicious looking cells were created elsewhere on the brood frame — could they be more queen cells? Perhaps. But the bees huddled so closely to them that I could never get a clear view. Maybe that was proof enough!

In any event it took quite some time to spot any queen in the small hive. When I did find here, she was very dark and looked by her entourage and action that she might be laying. Not so!

Queen piping started and a the next day she flew the hive with a very tiny caste. But at least the piping (calls between rival queens) and the swarm seemed to prove that there was at least one more queen about to emerge.

The next queen proved even harder to spot, but after several days I did see here. I waited for her to start laying. But no eggs appeared and then the workers started to congest the centre of the brood frames — a fairly sure sign that something had happened to the queen and that they were not expecting a laying queen any time soon.

The colony was queenless and doomed! Perhaps the later queen had been lost or eaten by birds on her mating flight.

So, today, the brood frame with no eggs was replaced with one that has both eggs and larvae. That was no trivial swap since of course the hive is in the office! But it was successful and I wait to see if queen cells are about to be made. I know that in theory it is really too small a colony to produce a well-nourished and strong queen, but I have no spare laying queens or even sealed queen cells to give them. We shall see …

The failure of a queen to return mated to the hive is one of the not uncommon facts of honeybee life. I’ve just been reading in Jurgen Tautz’s The Buzz about Bees that a surprisingly high percentage of nucleii when moved to a mating apiary do not succeed in getting a mated, laying queen. The reasons for that are not at all clear, but one speculation is that small colonies might not be able to provide an effective escort on a mating flight.