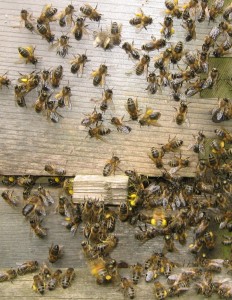 A local beekeeper has discovered he is now regarded as a beecharmer having worked wonders with a problematic bee nest with the help of Vita’s swarm lure.

“The owners of a farmhouse where there has always been a colony of bees entering through the eaves told me that a swarm had arrived the previous day on the other side of the building and were getting into a void there through several small openings at eaves level.  While they were happy to live with the original colony they did not want a second one here.

“I rather thought that as the bees had already been there more than a day it would be difficult to extract them from their new nest, but I put a nuc box containing the swarm lure sachet on the flat roof above a double bay window near the eaves entrances and about 6 metres off the ground.

“By the following evening the colony had moved out of the wall cavity and into the nuc and I was able to close it up and bring it down the ladder.  I think I remember you saying that prime swarms were attracted to the higher bait boxes.

“The owners were much impressed with this display of bee-charming.” 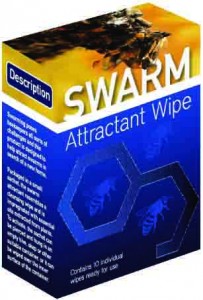