I must apologise on behalf of my observation hive bees for this very murky picture, but it does tell a story. 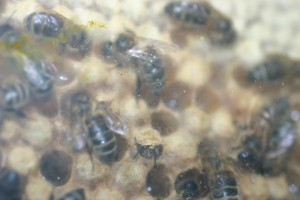 A murky picture tells a story: a drone emerging into the colony.

The first drones have started to emerge today and you can see how grimy the inside of the observation glass is becoming. The colony has been behind the glass for about one month now.  I would spring clean it, but that’s easier said than done, since it would unleash bees in the office unless I move it elsewhere which will cause another set of problems!

Drones are certainly living up to their lazy reputation (oops, slipping into anthropomorphism here!). They are the only bees in the colony that will stand around doing nothing — all the workers seem to be constantly on the move — or busying themselves at the bottom of a cell.

The Queen meantime is more leisurely than I expected. She ambles around, occasionally dipping her abdomen into cells to lay eggs. Unlike the Queens I’ve seen in regular hives which when opened usually show the Queen scurrying around running away from the light, the Queen in the observation hive seems unperturbed when I remove the hardboard light covers to watch. She doesn’t automatically retreat to the other darker side.

Now I must make plans to clean the glass which is very murky in parts.